With excerpts from “The Secret Garden”

Last fall, I began reading The Secret Garden by Frances Hodgson Burnett, where the words above were penned. I read half the book, slowly taking in its offerings over a few months of time. But the busy holidays, then launching these writings, caused a long break. When I felt compelled to pick it back up again, I skimmed over the chapters to bring me back into its nurturing tone. Oh my, what a treasure I found in Chapter Nine!

Mary Lennox, the book’s heroine, is described as “the most disagreeable-looking child ever seen.” She is sent to Misselthwaite Manor on the Yorkshire moors to live with her aloof hunchback uncle after becoming orphaned when her parents suddenly die of cholera. Thin, sickly little Mary, who was already unloved, is left alone to fend for and amuse herself. Because she is forbidden to roam the near 100 room mansion, the outdoor gardens are all she has to explore.

She learns from an amiable housemaid that there is a hidden garden no one has entered for a decade; the same number of years Mary has been alive. It has been locked up and neglected since her uncle’s wife died. Intrigued, Mary sets out to find the elusive place.

A friendly little European robin leads the way as he digs for a worm, uncovering an old key buried in the dirt. Eventually, he flies up into a tree, revealing where his home is—inside the secret garden. The opening quotes help us imagine the bewilderment of what Mary sees, a seemingly quite dead garden.

Photo by Simon Schwyter on Unsplash

When I re-read this it was February, well into winter. I had just been thinking about how most everything, aside from evergreens, appears dead. My life had felt much the same for a decade, my dreams and talents buried in the grave of what seemed a never-ending winter. Some talents laid dormant for more than two decades even, like my art (surprising fact: I was an art major in college).

Back to the book, after observing quietly and reverently, young Mary decides to skip around the place, stopping occasionally for a closer look when something captivates her attention. Arriving at an alcove, she thinks she sees something emerging from the black earth—”some sharp little pale green points.”

In the book, Mary instinctively begins to clear the grass and weeds.

This is an excellent analogy of how crowded our life becomes. Somehow, we know deep down there must be something more. The scene seizes me with its truth; hidden beneath the wintry surface of our slumbering lives, life is being made new as signs of spring appear among what is dead. Something utterly beautiful is trying to push its way up through the crowded soil of us.

Next, when Mary had finished with the first ones, she delights:

Oh! What greater revelation grips me! How tenderly, carefully God removes the “grass” and “weeds” crowding our ability to come fully alive again. He makes space for new life to thrive, for us to grow. He gives us room to breathe.

And as if making room weren’t enough, there’s more.

God knows such deep work in us cannot be done in a single day. Not because He can’t or doesn’t have enough time for us, though. He is wise as He kindly extends the tending of our “garden” over time, nurturing us in palatable measure.

​As I wrote last week, our tendency is to hurry things up. To get it over with. In contrast, His joy is to return, to come over and over again with great anticipation as He works in and around us. It is intimate. It is His delight. Healing is intentional. It won’t come by mere accident, and it won’t come without us – requiring both God’s attention and ours.

Have mercy on your soul. Befriend the parts of your soul that need care. God is patient with you. May you be patient with yourself. Such intricate work cannot be rushed. In due time, all that appears dead in you will become a mighty fine garden, as you come fully alive shoot by little pale green shoot.

A prayer for us:

Jesus, thank You for clearing the earth around me so I can have room to breathe and grow. Make space possible where it seems impossible. Clear pockets of time in my calendar. Show me what things I am filling up my time with that are hindering Your love. Where I am tempted to endless distraction, give me strength to stand and escape with You. When I reach for shallow things to provide relief, show me Your way of restoration. If I hide from my own heart out of fear, give me courage to believe You are with me and will strengthen my frame as we face the broken-hearted places together. I love You. I need You. I want You. Help me to breathe. Make me like a well-watered garden.

Hi! I’m Melissa. Come on in. Sit down. Kick your shoes off if you like. I want you to feel at home here. 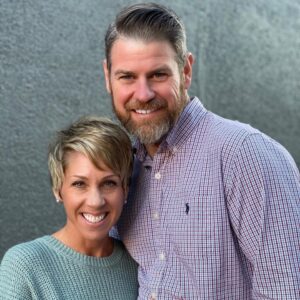 Melissa. Daughter of God. Lover of Jesus. Wife to Andy. Mama to four fun-loving adult children, and two bonus sons. And now, Mia to TWINS. Embracer of brave. Why? Because in every doubt, in every broken cry, God is making me whole again. Join me?

Follow me on social for more encouragement. Plus, #fridayfun! These posts invite us to creatively practice fun, rest, and adventure. We need play, rest, and even work to thrive! I'm still learning to do this well. Join me, and I'll take you behind the scenes of life, and just be "reel". There are also unique videos of #bedtimeprayers on Sunday nights.